Light-air Sails and Their Uses

(This post is an excerpt from an online article. To read the entire article, click on the link at the bottom of the page)

The list of potential downwind sails for use in light airs is mindboggling, and it only seems to grow every year. The question then becomes: what does a typical cruising yacht actually need to make reasonable speed in light air without resorting to the engine?

A lightweight reaching or running sail will often propel you 50 percent faster than just the main and headsail. For example, if you are making 3.5 knots under jib and main alone, you could be making 5 knots with a light-air sail. This cuts way back on engine use, whether daysailing or on passage.

Spinnakers of any variety often conjure up images of over-extended racing crews getting in a mess, but it doesn’t have to be that way. This is especially true because the biggest benefits of specialized downwind and reaching sails on cruising yachts come in lighter airs, when control is easy and the sail provides that big boost to speed. Therefore, symmetrical spinnakers, and asymmetric spinnakers and Code 0’s, both of which fall under the catch-all “genneker” category (see sidebar “Decoding the Terms”), all potentially have their place.

In this first part of a two-part series on light-air downwind sails, in Sail Magazine, Rupert Holmes looks at the different types of Code 0’s and A-sails now available to cruisers. To learn more about how to handle these kinds of sails.

Until a couple of decades ago, almost every yacht had a sailplan with a large overlapping genoa. And while these tend to be inefficient when partially furled for sailing upwind in a stiff breeze, they make reasonable reaching sails and can also be poled out to good effect when sailing dead downwind in stronger winds. 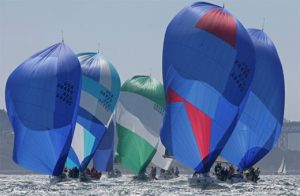 More recently, however, fashion has turned in favor of small non-overlapping blade jibs, often self-tacking. These are much easier to handle, especially when short-tacking shorthanded, and are often significantly more efficient upwind, particularly in a blow. However, they quickly lose efficiency as the boat bears away from the wind.

The reason for this is that, because they are so high aspect in their cut, as soon as the sheet is eased twist rapidly increases to the point where the top of the sail is wildly undersheeted, even if the lower part is still over-trimmed. This can be solved to some extent when close-reaching with an outboard lead for the jib sheet, but even then it won’t help once the apparent wind is well aft of the beam.

Some designs for long-distance cruising combine the best of both worlds by carrying a large overlapping genoa on the headstay, plus a blade jib on an inner Solent stay, both handled with furling gear. However, aboard a smaller cruiser this kind of double-headsail arrangement is not always practical and adds a fair bit of complexity. 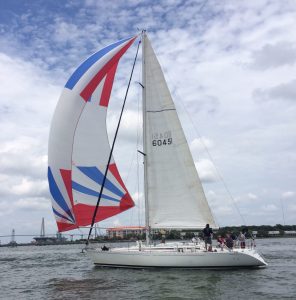 Note that when talking about downwind sails there is a very real distinction between those configured for reaching and running. No single sail can do both efficiently. (An exception is aboard those high-performance boats that are so fast the apparent wind is always forward of the beam.) Conventional symmetric spinnakers flown from a pole, for example, will happily sail with the wind dead aft but will struggle in all but the most skilled hands with apparent wind angles much forward of around 100 degrees. True, with the apparent wind forward of abeam you may still be able to keep the sail full. But its shape will be horribly inefficient, contributing more energy to making the boat heel than to driving it forward.

It’s also important to recognize there’s no reason why you should keep exactly the same sailplan aboard your boat as when it was built. Sail design, materials and trends—both good and bad—all change over the years, and there’s no reason not to take advantage of whatever advances have been made since your boat left the factory. Just because your boat carried a convention symmetrical spinnaker all through the 1980s, doesn’t mean it should necessarily do so now.