Here is a list of the “Deed of Gift” documents for all the races, regattas, and awards organized by the Thunderbird Sailing Club. 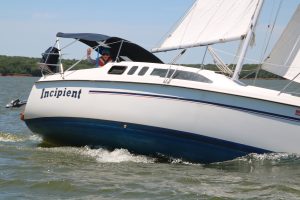 The Commodore’s Cup Trophies will be awarded annually to the qualifying skippers who meet the requirements herein specified and have the lowest point score within the Commodore’s Cup Series. Separate trophies will be awarded to Spinnaker and Cruising (non-spinnaker) Fleets. The series and trophies are intended to encourage Thunderbird Sailing Club members to compete on a consistent basis and officiate in Thunderbird Sailing Club events. The trophies also recognize sailing ability.

SELECTION PROCESS: In determining the winner of each trophy, the low point scoring system will be used with one (1) point for each first place, two (2) points for second place, three (3) points for third, etc. All events not raced will be scored DNS (Did Not Start). Each qualifying skipper will be allowed two (2) throw outs. One of these throw-outs will be for Race Committee duty, if performed for a series qualifying race. The remaining throw-out will be applied to an event not sailed in followed by highest score(s), worst finish, and for events actually sailed in, in that order. Scoring points will be determined at the end of the Commodore’s Cup Series and will be based on the finishing position of each qualifying skipper in relationship to the finishing position of the other qualifying skippers. The positions of non-qualifying skippers in each event are to be discarded. The scoring applies separately to both fleets.

In accordance with the Racing Rules of Sailing 2005-2008, Appendix A9; DNS, DNF, RAF, or DSQ points will be based on the number of qualifying skippers that come to the starting area, by fleet, plus one (1). For a skipper that did not come to the starting area, points will be based on the total number of qualifying skippers, by fleet, plus one (1). DSQ (disqualified) points cannot be thrown out.

In the event that a qualifying skipper has sailed in both fleets, scoring will be based on the results of the fleet in which the skipper sailed the majority of events. Competition in the other fleet will be scored as DNS and the skipper will not be considered as qualified; in the fleet he is not being scored with. In the event that an otherwise qualified skipper competed in an equal number of events in each fleet, that skipper will be so noted as having qualified; but his results in all races in both fleets will not be included in the scoring of other qualified skippers.

The Fleet Captain is responsible for determining the qualifying, and doing the scoring of Commodore’s Cup skippers. A written summary of the scoring will be presented to the Commodore for concurrence prior to having any trophies engraved or presented.

THE AWARDS SHALL CONSIST OF: The awards shall be perpetual trophies and remain the property of Thunderbird Sailing Club. The winners of the trophies are responsible for the trophies while they are in their possession. In addition to the trophies, there should also be a small engraved plaque for each of the winners to keep as recognition of their accomplishment. This plaque will be presented at the same time the trophies are presented.

PREPARATION OF THE PLAQUE: The Fleet Captain will be responsible for retrieving the trophies from the previous year’s winners.

PRESENTATION OF THE TROPHIES AND PLAQUES: The time and place of the awards ceremony for the Commodore’s Cup trophies will be determined by the Thunderbird Sailing Club Executive Committee. The trophies are traditionally presented at the annual Holiday Party. 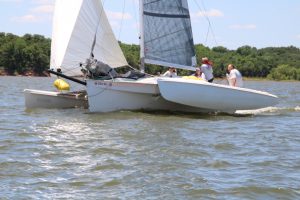 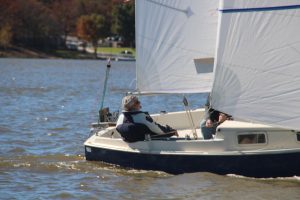 The selection of the most improved sailor shall be made by the Fleet Captain in consultation with the Race Protest Committee. The Fleet Captain may rely upon input from other Thunderbird Sailing Club members in making the selection. The cup will be awarded at the end of the season, traditionally at the Holiday Party.

The cup shall remain the property of Thunderbird Sailing Club. The winner is to retain the cup for the year following it’s presentation. The Fleet Captain will be responsible for obtaining the cup from the winner and returning it to the Executive Committee prior to the next awards ceremony. This cup will not be engraved with the name of the winner each year. Thunderbird Sailing Club is responsible for maintaining the cup. 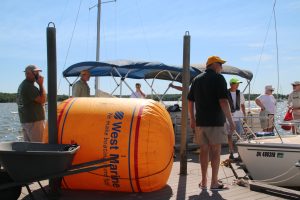 The origin and initial intent of the Chief Thunderbird Trophy remains shrouded in mystery, the trophy has been used to recognize superb skill in running aground at critical times in critical situations, breaking masts, blowing sails, buying a whole set of new sails and still finishing last, and other similar feats of skill. However, the cup may also be awarded to show appreciation for service to the Thunderbird Sailing Club. 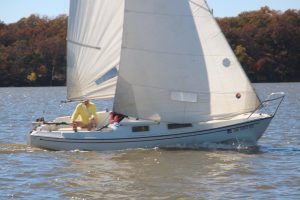 THE AWARD SHALL CONSIST OF: A plaque from the US Sailing Association, which will have the person’s name permanently engraved. This plaque will remain the property of the Thunderbird Sailing Club, but may be kept in stewardship by the winner until the subsequent year’s winner is selected. If a permanent facility for the Thunderbird Sailing Club is constructed, the award will be permanently displayed in the building. In addition to the plaque, the winner will also receive a framed certificate from the US Sailing Association.

The winner of the award shall not be eligible for the award during consecutive years.

The elected officers, as defined in the By-Laws, (Commodore, Vice-Commodore, Rear Commodore, Secretary , Treasurer and Fleet Captain) shall not be eligible during the year in which they serve.

NOMINATION PROCESS: A call for nominations will be made via the October edition of the Mainsheet.. Nominations, with comments attached, must be submitted in writing, and signed by the nominating member. Nominations must be received no later than the Hiram Douglas Regatta and shall be mailed or forwarded to the Secretary, or any of the elected officers.

SELECTION PROCESS: The Secretary will be responsible for forwarding the nominees to the Commodore. The elected officers will make the final selection from those nominated.

PREPARATION OF THE CERTIFICATE AND PLAQUE: It is the responsibility of the Vice-Commodore to have the certificate appropriately printed and the plaque engraved per instructions from the elected officers.

PRESENTATION OF CERTIFICATE AND PLAQUE: It is the responsibility of the Vice-Commodore to obtain the plaque in November from the previous winner and have the new winner’s name engraved. The winner of the award from the previous year will make the presentation at the annual Holiday Party. If the winner, or his/her representative is not present, the Commodore will make the presentation. 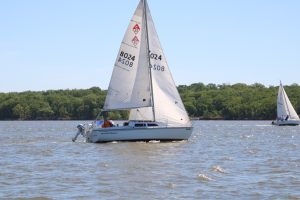 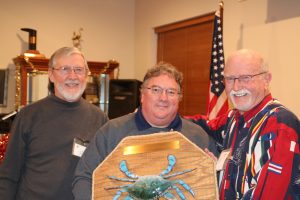 Be it known by all those present that this prestigious award is named in honor of Capt. Donald E. Cummings of Tilghman Island, Maryland. “Uncle” Donnie is a life-long resident of Tilghman and has been a Chesapeake Bay waterman since he was sixteen years of age. “Uncle” Donnie is a character; yet he epitomizes the love of the water, his family, his profession, and his concern for the future of his craft and the Chesapeake Bay.

He and his wife Jo Ann were most gracious hosts to our club during the 1995 TSC Charter Group’s Chesapeake Bay Cruise. They visited with us at Dun’s Cove located off Harris Creek, had dinner with us at Higgins Crabhouse and provided transportation for club members to and from the dinner. On Saturday morning they welcomed six of us to their home at 5:45 a.m., had hot coffee and donuts ready and took the group for an unforgettable crabbing trip on the Choptank River. Donnie never expected anything in return othe than the enjoyment of making new friends and sharing his very humorous and entertaining yarns with an attentive audience.

His wonderful sense of humor, knowledge of the Bay, desire to teach others, and demonstration of his skills helped make our Chesapeake Bay Cruise an extraordinary experience.

NOTE: “Uncle” Donnie passed away at 55 years of age on March 31 2000, and the “Uncle” Donnie Award was prominently mentioned in his eulogy at his funeral. Over 300 people attended his funeral and several memorial donations were made to the BoatHouse in his honor.